The Passion of the Student: A view of the Guru Shishya Parampara 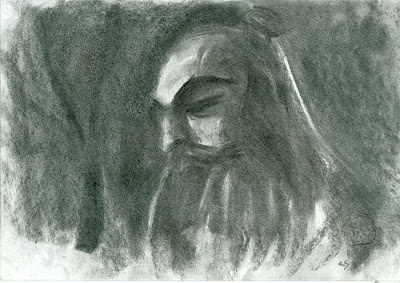 I just love the passage below.., for me it symbolises the very essence of the learning process.. It is from a biography of K.L.Saigal, a prodigious singer/actor from the early years of Indian Cinema whose songs are cherished by a very devoted following.. more about him later. This book, K.L. Saigal– The Pilgrim of the Swara is lovingly written by Raghava Menon and this passage even though  talking about music, rings so true for all artistic pursuits..
"The fact that in traditional  the method of teaching prevalent was the Guru (teacher) Shishya (student) Parampara (tradition), did not mean that every student who joined the gurukul automatically acquired a guru. The actual product of the parampara, which is the unique creative person who stood in symbolic relationship to his time, occurred because of a unique relationship of a student with his guru. The system was no more responsible for this person than the apple that fell on ’s head was responsible for the 3rd Law of Motion.

The parampara was only a convenience, an ideal environment for the acquisition of a guru. That was all. It was always the student who sought out a teacher, never the other way around. The triggering mechanism of this relationship was the student. Never the teacher. To say that the guru-shishya parampara is dying out in  is to say that it is no longer possible for the student to love the art more than his very life anymore. It does not imply that there are no teachers who can become gurus to students who have the necessary psychological motivation.

Most of the collateral features of such a relationship which are given so much importance in latter day analyses of the parampara, such as physical service to the guru, implicit obedience to him are small peripheral symptoms of this passion and not a cause or the substitute for it. Every generation has produced men and women capable of such passion right up to the present time. Few certainly, and they have always been few, but enough to put the wonder and mystery back into the simple art that is taught in school as Indian music.

Unfortunately, this relationship cannot be observed from outside, for it cannot be understood apart from the art itself. For the greater part of the relationship lies outside time and space. The specifics of raga and tala or composition can be acquired easily and by the simplest instruction. The real thing which such a student acquires from his Guru occurs through a subtle osmosis, a non-material transmission which is formless and without parts.

There is more than knowledge which passes between them. And this does not take the form of a teaching but manifests itself as a change of Being. This capacity to transform one's Being arises out of the interaction between the Guru and the shishya and is a kind of rebirth. The student extracts this out of the guru with the strength of his own passion."

K.L. Saigal – The Pilgrim of the Swara Raghava R. Menon 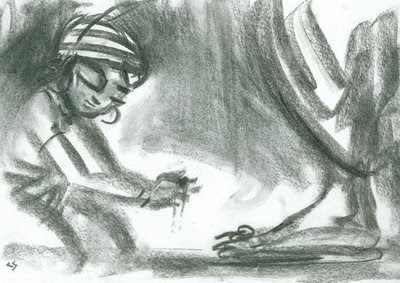 These are some of the charcoal sketches used in the Title sequence/Prologue for the film Ekalvya.. The prologue ( voice over narrative by Amitabh Bachchan) told the story of the tribal prince ( Ekalvya) who became immortal in myth as the ideal student.. He was so devoted to his Guru that despite being denied formal education, he learnt archery all by himself in the forest in front of a statue he made of his guru, the legendary Dronacharya. He was so devoted and focused he became a finer archer than all the royal princes personally taught by the great teacher.. An inspiring story from the Mahabharata.. and very significant, personally. 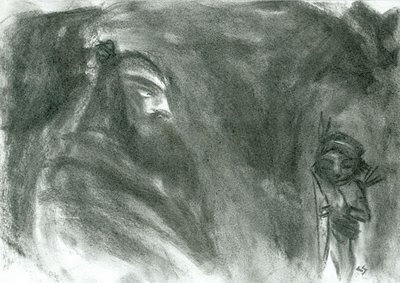 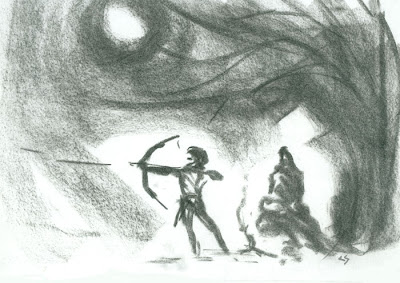 An extensive account of the making of this 3 minute piece with lots of images here..

Posted by the Conscious Self at 6:50 AM 2 comments:

this is interesting.. a blog.. I step in with much trepidation..
one has always seen the work of many talented artists with great delight..
and the spirit of sharing fostered by these blogs on the internet has been a source of inspiration and humility for me.
The sketches and images produced in the course of my work as director/animator at Animagic are all part of a great and ongoing learning process which I hope will meet with kind appraisal by fellow artists..
Dedicated to my Guru, to the supreme teacher and all teachers past and present.. 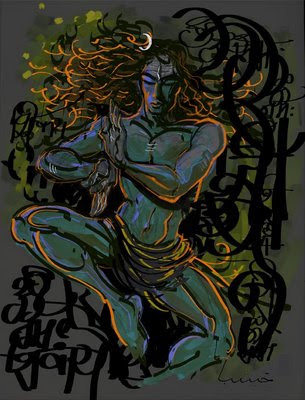 One of my earliest attempts to paint on the comp.. the cosmic dance of Shiva.
Posted by the Conscious Self at 12:56 PM 2 comments: