“What is really important is providing role models, A nation marches ahead, provided it has role models.” and providing us with these he himself became one.
Uncle Pai is no more..as of 24th of feb he has passed into legend, like the tales he told us through his comics. As the creator of Amar Chitra Katha comics and Tinkle- the magazine for children! he is undoubtedly a major figure in Indian Pop culture & occupies a unique and pioneering place in its publishing history.

There have been many imitators but none have come close to the status of Amar Chitra Katha comics as THE comics for Indian culture. Probably because it was the first and laid the foundation of the graphic retelling of the myriad dusty tales from this ancient land.. probably because it had some of the best artists and writers contributing to it consistently.. but I suspect it had more to do with the force of Uncle Pai's personality.

One of the most amazing stages of animation film making is character development!!
where personalities emerge where there were just names or concepts earlier... what does Maya look like..how old does he look.. his three wards.. what are they like...what is the appearance of Vishnu, Brahma and most importantly Shiva himself?

What about the world of the story..other supporting cast who will interact with these main characters and make the story real for the viewing audience? the refugee asura people who become prosperous only to become refugees again.. the deva council with Agni, Vayu the sages...the deva and the asura warriors who would fight the big battle..
Tripura was a truly ambitious film to design. Its scale and proportions were epic in the true sense of the world. We always designed acc to the needs of the story and characters and then if needed tailored them for the production format. Really no reason to think we couldn't have an epic for the small screen!...sigh..

After Maya got designed, I finally realised who he reminded me of!!! I seemed to have subconsciously cast a dear friend's brother in the starring role!! Murli Menon (who has since become a dear friend himself!) was of course overjoyed!! And as we came to know him better, he turned out to be a major entertainer!! quite unlike our too serious Maya in the film.. He's too talented!! and great presence too! He should be in show business!!!

Many more thanks to all the people that are continuing to express their satisfaction over Tripura!
As a response to requests to share some more artwork from behind the scenes at Animagic, I present with great relish some of the earliest concept art that was presented to ACK and CN to give them an idea of the direction we wanted to take. In all modesty we can say these generated much excitement at that very initial stage!! 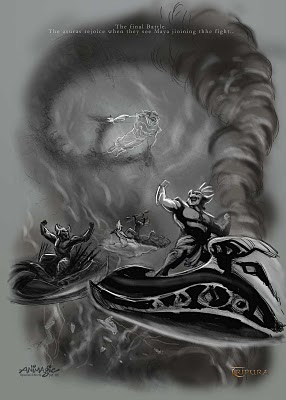 An important image which presented the concept of Vimanas or 'flying machines' which emerged during visual development. 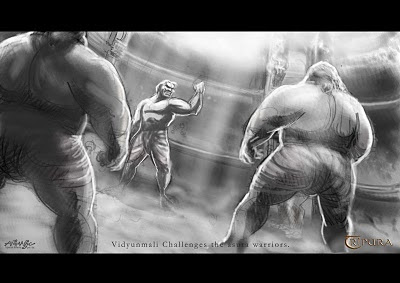 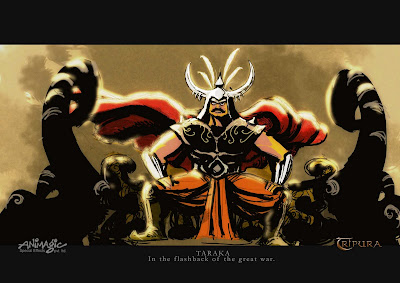 The above image set the tone for the color script of the flashback sequences. 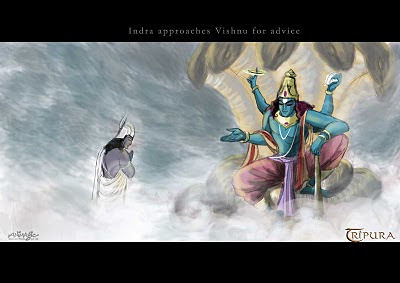 Wanted to see realm of Vishnu as a space without boundaries or an empty, endless vastness ..Ananta..
All the above images by your friendly neighbourhood, C
Posted by the Conscious Self at 2:33 AM No comments: 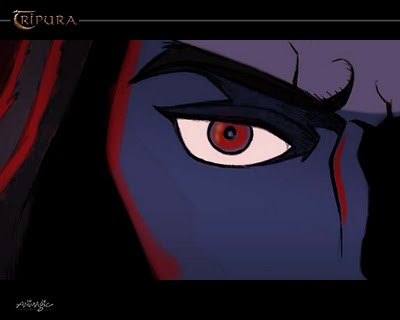 Shiva's watching...
A still from a pre-production promotional trailer animated by Animagic
So it is has happened..
Tripura was finally premiered with no fanfare on CN on sunday at 12 pm and then re-screened at 6 pm..off sync as well! sorry for all the hardwork put in by Eli, Aldrick n co to perfect the track! :(
Thanks to everybody that watched it and gave your much valued appreciation. From all your feedback, We can modestly say, we have succeeded in pushing the quality of Indian Television animation... towards sophisticated characterization and mature storytelling or maybe just telling mature stories! Glory to Shiva!!!
Major peeve: the films last shot of Mohin in the distance screaming Dharma!Dharma! faded to black and immediately without even pausing for a fullstop, let alone any credit roll, the next program started!! It was simply unbelievable, if not for the credits on that prog, people thought the film was still not over! perhaps that was the idea..not to lose viewers in transit from one show to the next! And this happened both times! In the evening the film was stuck to Tom n Jerry. While ordinarily I would have been honored with being on the same platform as those legends.. the overlap was just hideous.. Is the viewer a robot whose hypnotic trance must not break ??!! Sheers insecurity which betrays the low confidence in your product.
Most regrettable is that none of the artists, from Animagic or Inspidea, or the voice talents, or musicians, technicians got any credit.. very sad.
This just presumes that people don't care for their work or .. that they just work for money and are not interested in their association with a project.. Certainly the avoidance of their credit seems like they are all nothing but a inconvenience for the network.. why! nobody is interested in who made the film, right!? who stands for the credit roll at the end of a film in theaters?
The corporate honchos got themselves up in the beginning of the film..but they green-lit it.. that is more important than actually making it..(?!!) mercifully the writing/directing credits were included upfront!
Well everyone tells me thats life/corporate behavior/business/show business etc etc.. I dont agree with it.
This attitude hurts the many people who put in their sincere efforts to make a special project, working far beyond convenience and monetary benefits! Now I am not going to break any glass partitions in corporate offices, but unless there is respect for the artists there is never going to be a rise out of mediocrity for this industry or this country.
I would like to take this unfortunate moment to thank all the folks involved in the film right from inception, research, development, thru design, production and sound work..
So a special mention of Harshad Marathe, Vajra Pancharia, Romel, Suraj Pandit for their work in the initial research and development.
Sachin Kondhalkar, Vinod Sawant, Prajakta Sansare, Jude pires, Hrishikesh Deshpande, Shaunak Samvatsar, Laxman Khandekar for thier efforts during the design and entire pre-production. Ably supported by Anil Salvi and Shakuntala Agre, without them we couldnt have created anything in peace.
Artists at Inspidea for all that they translated onto screen. We appreciate their efforts, this production was not their average TV assignment.
Eliza n Greta Lewis, Atul and Alric of Oringsham for their work n understanding in creating the voice tracks. All the talented actors who put in their best for the characters personalities.
+ all the musicans and technicians who I have not had the pleasure of knowing personally but have added to the film. Also Kushal Ruia who had to guide the film thru post production.. a job I envy him for. You tried your best. Of this I am sure.
here are two trailers I found on youtube:
The 15 sec is the promotion done by CN.. and the longer one seems to be ACK's offering on the www. The promo just about made it to the screens in the last week and the trailer went online.... 3 days before release!!
Posted by the Conscious Self at 3:28 AM 2 comments: