Summertime at Prithvi.... and Animagic !! 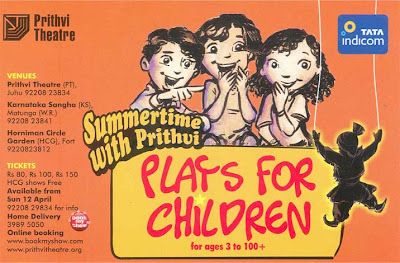 Guess who! on the poster and ads for the 'Summertime at Prithvi' activities!!
For those who are not aware, Prithvi Theatre is one of the most respected institutions for theatre in the country. Named after the legendary Prithviraj Kapoor ( one of my favourite actors.. amazing as one of my favourite characters in one of my favourite films of all time: Emperor Akbar in Mughal-e-Azam) who ran a theatre company by the same name from the 40s to the 60s. It was brought back to life by the late Jennifer Kendall and now driven by Sanjana Kapoor, has come to symbolise a theatre movement that is vibrant and alive in Mumbai. It organises a festival every year that is a "must attend" for theatre lovers.
They also have workshops and plays and activities for children in the summer holidays.. and we illustrated a couple of posters for that. Well they were used last year, and this year too, they have made an appearance with some rearranging by our friends at Ka Designs ( for whom we did the posters. Very good work) The funniest part is this year's campaign is practically an Animagic visiting card!!!
HOW? Like this.. among the  kids enjoying the  puppet show, I had drawn a lot of friends and teammates as kids (the original poster below)..obviously including Sumant, Gayatri & yours truly(right to left).. Now you know!
The Animagic trio all over the city!!  ;)
Quite in time for our 12th birthday ( 1st May) !! cheers!! 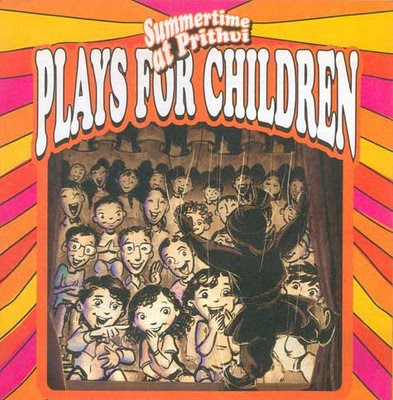 The original poster
Posted by the Conscious Self at 7:40 AM 2 comments: 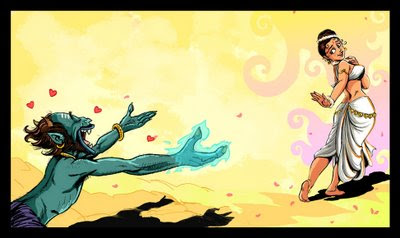 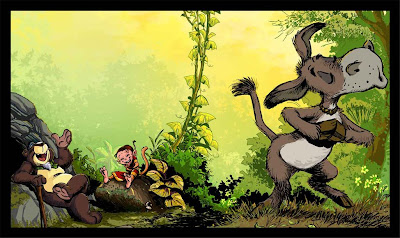 Just wrapped up 2 children's books for Karadi Tales.. should be out in a while..watch out for 'SUPER HATHMAN' & 'THE TALLEST TALE!!'
Meanwhile 2 books we did last year for them are very much on the shelves. Do check out 'BAKASURA & BHASMASURA' available as a set.. they are audiobooks so the books are accompanied by a CD which contains the stories narrated by Girish Karnad along with great music and songs composed by Three Brothers & a violin. The text is in the book.. so buy it!! 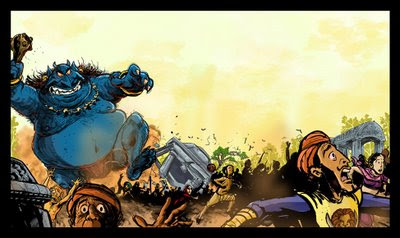 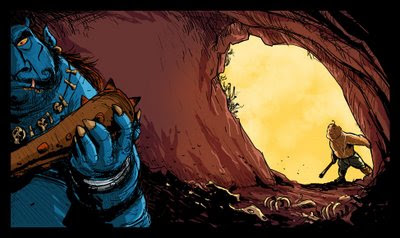 The Karadi series is easily one of the best products in the Indian market for children. check out all their stuff, its ideal gift material for the young people you know. We've done 3 other books for them in the past, THE MONKEY KING (1998), THE BIRTH OF KRISHNA & KRISHNA'S CONQUESTS(2000), of which the monkey book won the NAPPA 2000 Award by the National Association of Parenting Publishers,USA. It also contains really fun songs!! We animated one of these, Bandar Bindaas Bandar which was India's first fully cel-animated music video.. sadly didn't air too much.. but was good fun nevertheless. :) 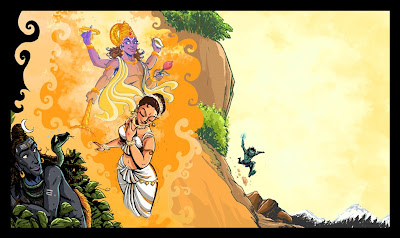 Posted by the Conscious Self at 2:25 AM 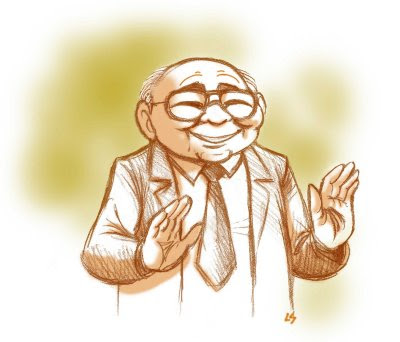 Mr. Shanbhag as I remember him, always smiling and radiating warmth.. "don't worry.. carry on.."
Mr. Shanbhag passed on this year in February. As the founder of Strand Bookstall, the fondest  haunt of ardent book lovers, he was practically the patron saint of book selling in Mumbai, having provided books to the brightest stars of the India like Pt. Jawaharlal Nehru, Homi Bhabha, Vikram Sarabhai and among others, ex president Dr. A.P.J. Abdul Kalam who was also a personal friend. Probably the only bookseller to be awarded the Padmashri, he was gentle, kind and his legacy. Strand is a place where you can get the most competent assistance, freedom to chill... and yes, great discounts!!

Back in the early '94, it was very rare to find books on animation.. you were lucky if you stumbled upon something.. I had  just started in animation and had set out to buy some.

I was young, 15, and prior to my grand adventure in animation (I had no clue of the grandness of it then..), had hardly ever ventured out of Chembur. Everything was fascinating, I was obviously nervous at every step. Even more so, when it came to money and spending it.. I had no idea what anything cost! least of all good books.. new books.. You see I had only bought books at the local 'raddi wallah'.

So here I was in Bombay (then) city proper with an aim to buy the Preston Blair books & whatever else I could find.. I got the PBs at one of the art stores opposite Sir J.J. School of Arts, and then wandered around the fountain area, a magical place for book lovers then, just crowded with booksellers of every kind of book possible..( yeah every kind)..I was lucky here too.. found an amazing book "BUGS BUNNY- Fifty years and only one grey hare'.. it cost me Rs150 (a steal when you think back.. but seemed like a terrible lot then).

Well soon enough, I landed up at Strand Bookstall. This was my first real book store and it was every bit as I dreamt a bookstore would be.. just filled to the brim..with books & more..warmth.. and you could sit amidst the books.. on the floor I sat for a long time and browsed.. This was more than a blessing, I was on the right path!
I found the Muybridge series here but to my dismay, they were very expensive! 750 bucks! I chose only  the 'animal movement' then... (figured that as far as human movements were concerned, one could just look around..!) But I didn't have that kind of dough. And I couldn't imagine being able to come back that far again..
I asked, one of the kind gentlemen offered a solution, I gave an address and some advance and They actually delivered the book to me in the next couple of days.. I was ecstatic, privileged, respected, not treated like some silly kid.. felt validated and grown up!

That was the beginning of my relationship with Strand..

Later, with the advent of the Internet I realised what a wealth of knowledge was available to aspiring artists in the form of amazing art books. You are only as good as the exposure you get, so the artists abroad were in an enviable position of being able to walk down to their local bookstore and have access to such treasures as one could only dream of..
Much begging around, looking for friends going abroad.. concerned over postal services, every book to be ordered being a sizable investment..
Finally landed back at Strand.. give them a list, they would order the books for a 50% advance and you were sure you would get your books!!!!!

I cant explain enough what this meant for us.. what it did to us... what it made us.. I can't sum up enough gratitude for this invaluable service, provided with such love, that I have always felt the recognition of calling home every time I meet people at Strand..

I finally met Mr. Shanbhag himself, after we had won many accolades for Raju & I, and took his blessings. In fact I could only then consider myself worthy of being in his presence as I felt I had finally justified myself and my hunger for knowledge  He and his wife were always very kind, very generous with their love.. and many a times, they actually kept the store open an extra 10 -15 mins even, as we got our billing etc done.. (we almost always reached the store a just before closing time!!).. and waited for us to finish.. It was all very overwhelming and special .. and from all accounts, they were this way with generations of readers..
SIMPLY INSPIRING!

THANKS TO STRAND FOR being so great!! and 'Shat shat pranaam' to Mr Shanbhag for having created such a marvellous institution!!

"I firmly believe, as a bookseller, that the moment you divert money into anything other than books, you are insulting Saraswati ( the Goddess of Learning & Knowledge)." T.N. Shanbhag.

May he look down on us with Love and always shower us with his compassion as he did in his life.

read more:
Ranjit Hoskote on Mr.Shanbhag: 'Honouring the bookman'
Jerry Pinto's 'Requiem for a book lover'
another tribute from Abodh at "Straying Around''
Times of India: 'He spent a lifetime serving the written word'
Posted by the Conscious Self at 4:07 AM No comments:

In a lighter vein: Amitabh Bachchan

Now for something completely different...or is it?!!
Remembered these sketches (made long ago when we were working on Ekalvya) when writing the last post.
Dusted & cleaned them up.. was fun.

Btw that's Amitabh Bachchan, India's greatest Star of the last four decades. Both the sketches are based on my own experience being around him during the shoot of Ekalvya. I must admit, that I entertained the notion he wouldn't be larger than life at all..
But I am glad to say he was quite as you would imagine him to be.. overall at least, the details can be slightly different, the idiosyncrasies etc.. but he was very much The Big B.

AB as the title character, Ekalvya had a problem of failing eyesight.. but being an expert marksman that he is , he could get his target by sound alone.. His dialogue to Saif in the climax.." bas ek awaaz do... blah blah" was a source of much mirth. On a another occasion, I remember the director briefing him, " Imagine you are a dog!! Like a dog is aware at the slightest sound and flicks his  ears..." AB listened intently, probably wondering how he would flick his ears about.. he may have tried. 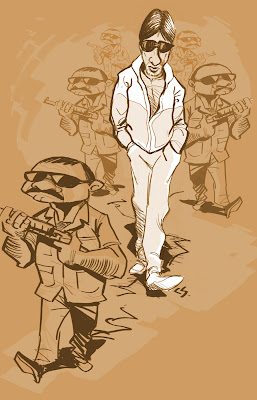 AB always had a posse of armed guards about him.. we had heard they were provided by one or the other of his influential friends.. (most likely Amar Singh? or Subroto Roy?) anyway.. they were of uniform character & personality ( at least as far as we could see).. however on more than one occasion they failed their job as some die hard crazy fan from the crowd gathered in the middle of the desert in Bikaner to see the shoot, would dive out and make for the Man! This would usually be a middle aged lady in a sari who was probably crazy over him since her childhood days.. and it was usually very funny and strange to see all these strapping guards completely taken by surprise by this woman who left her modesty by the crowd just to touch the star..
Then they would all jump her and overpower her, pin her down.. whatever, as they regained control of the situation with true machismo and pretended as if nothing happened at all. The dedicated fan would win her star's attention for that fleeting moment, maybe an autograph if lucky and all would be normal again. we were lucky she wasn't a terrorist.. With guards like these..
Posted by the Conscious Self at 11:08 AM 2 comments: