The 11th of December was the Legendary Thespian's 'happy' birthday!! Just thought of these really old sketches of him done for an animation piece sometime in 2000.. almost 13 years ago! With the sudden realisation of the passage of time, also dawned the realisation of the timelessness of an artist's work... Dilip Kumar was at the forefront of creativity and success in Indian Cinema for many decades of its golden age and has inspired countless actors from Dharamendra to Amitabh Bachchan to Shahrukh et al.. and somewhere down there in that list of the inspired I find a very earnest myself... I have always loved Dilipji, with not a feeling of an actor but strangely as an elder to look upto.. a person from my own family.. that I feel very close to tho I dont know him at all..
Anyway an old sketch from 13 years ago with a lil touch up.. (this was a printout of an image in our files which used a ruff sketch in the original..) Hope you like it and remember that we become who we do on the shoulders of the ones who came before us.. in his case, its the shoulder of a giant!

Posted by the Conscious Self at 9:38 AM No comments: 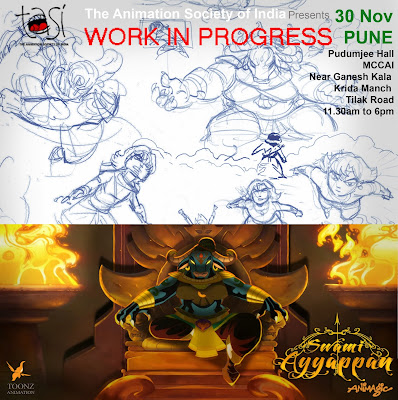 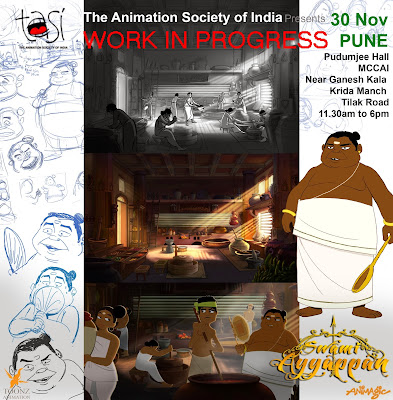 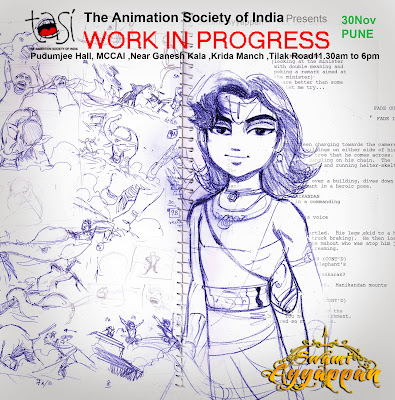 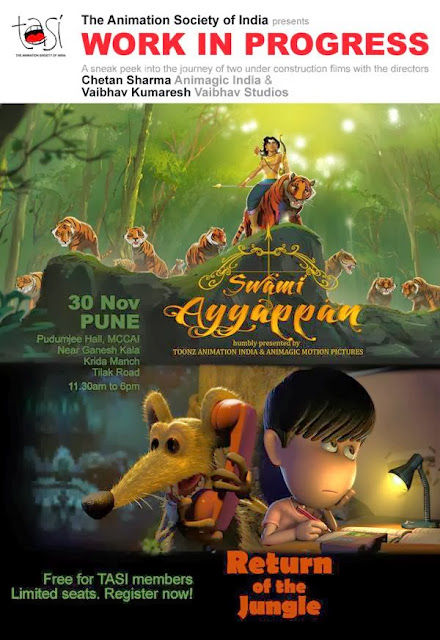 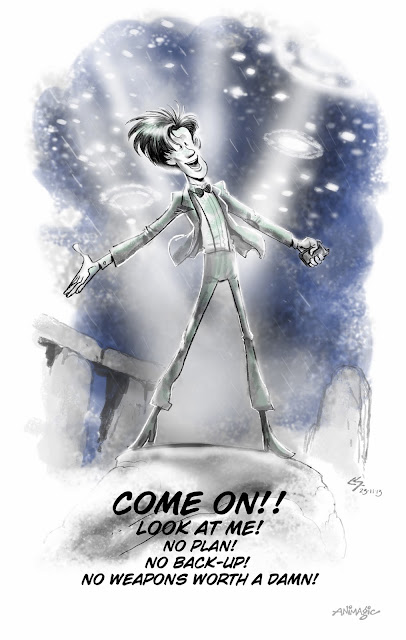 Since my last post for Mahashivaratri 2012, so much has happened it is not going to be possible to recount in a single post. Animagic watchers may have gleaned some of the goings-on from stray posts on the website or the occasional facebook news... but an an amazing lot happened... mostly happy stuff! :) peppered with a few tragedies (life..:( )
So with sincere gratitude to all above and below, here follows something like an annual report- a brief recounting of Animagic's adventures through 2012-13

Buongiorno Italia!
First, Animagic represented Indian animation in a special Cartoons on the Bay (Italy) focus on India.* Yours humbly along  with representatives of 4 other studios, presented various shades of  'Indian emerging'... DQ entertainment was also awarded International Studio of the year in the light of its major presence in European  animation and for its (growing financial contribution to the same via acquisitions etc) All in all a great time was had. TRIPURA was screened, appreciated and led to some great conversations. Impromptu picnics brought together the attending Indian delegates and created/ strengthened friendships..

Pakdam Pakdaai!
Which almost directly leads to the second thing; The acquaintance and consequent friendship with Hari Varma of TOONZ Trivandrum brought 2 new projects into Animagic. One of which was/is 'Pakdam Pakdaai" a chase comedy style cartoon currently on air on Nick at 6.30 pm daily.. We did the pre-production for the show's 7 episodes (each 21 mins episode with 3 cartoons of 7 mins duration) ie we did the turnarounds & expression sheets of all the main characters and then storyboarding/ flash animatic/ + designs of incidental characters and environments, + painting of master bgs).. An exhausting scheduling but a great experiment and validation: It has always been our belief that sincere, hardworking freshers can beat the disadvantage of not having field experience with proper mentoring. Our young team (mostly from Symbiosis, Pune) along with a handful of people of varying exposure to cartoon animation made up with their energy and commitment what they may have lacked initially in terms of experience. Kudos to Rohan, Shaunak, Anshita, Mitali who were eventually even supervising artists with up to 15 years experience!! Very proud of them all!
The project was wrapped up to the satisfaction of all in March 2013.. fingers crossed for PP's season 2..* 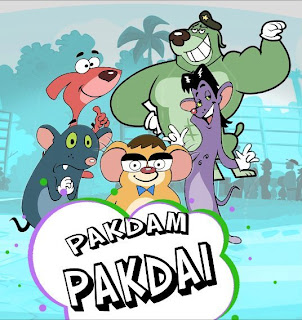 Call of the Divine!
The other major highlight of the year was beginning a new feature film!! Also in collaboration with Toonz, this time a co-production for a 90 minute venture that might become a big event in the coming year if all goes well. SWAMI AYYAPPAN, the boy-God revered by millions has never converted into an animation project ( people have tried). This first time telling of his exploits is co-directed by yours truly with the talented Mahesh Vettiyar of Toonz who has written the script. Being made in Malayalam ( yes, right!) this feature id designed and directed (and also now animated) in Animagic. Unlike Tripura, where the animation was outsourced to Malaysia, this film has been farmed out to several Indian studios who are all contributing little segments. While this kind of collaboration has been carried out by some before, this time is unique in many ways that will merit a separate post. Its looking good so far and we endeavor to make it worth the average Ayyappan- follower's time and the public's money. Its a lot of work (punishing to say the least, but it echoes the principle behind the pilgrimage to Sabarimala- a long and arduous journey to truth and purification) May we succeed.*

Notable also for more new entrants into Animagic- Mitra, part of the fresher group ( possibly the youngest in the studio) already has the entire animatic edit of an animation feature film to her credit.. Nilesh who has over the years accumulated much experience in the art of background painting but not allowed himself to be jaded or commercialized  His inspiration is Kazuo Oga (and I feel his work in Ayyappan is as sincere as Oga's for Ghibli) if he keeps up - Animation background art in India (as opposed to matte painting) will flourish and inspire the next gen!

The project!
Also finally a major (secret) collaboration with Ram Madhwani was also initiated and will soon be completed as well. A graphic novel/ live-action pre-production* project this also has an Indian root and very spiritual center which both Ram and I have had to search for within ourselves as well. Ram has been hard at that. I just about manage to draw.
All exciting stuff tho, needing growth by handfuls and never a complacent run. Typical Animagic project! Only made possible by vigilant support from Prajakta and G.

Executive style!
Throughout this busy year, we have had the good luck to have found our very first Production supervisor and all round manager- Shital who did yeoman work in harnessing the young talents to their deadlines- without losing integrity. For the former and especially the more important latter part we are grateful to her. She is the first executive management that Animagic has had and as such, a wonderful omen of things to come.

Commercials!
The ad work included small bits for Voltas all weather ACs and I-pill redux in the form of I-SURE, a corporate film for Videocon, several pre-production & storyboard projects like the HIPPO -One World tvc, Maruti, GreenLam laminates-Soundarya Premi etc.*


Events & lectures!
Apart from these the projects some happy incidents included accolades from the Industry as 'Lionheart leaders of Independent animation for both G(ayatri) and yours humbly, sponsored by ARENA, an invitation to speak at the MAAC event in Goa with both students and mentors about animation, character design and the need for artists not mere technicians. Thanks to the door-drishti of Sanjiv Waeerkar & his team which wanted the students to aim higher. A very urgent need indeed and not just for MAAC students.*
A session at the Ecole-Inuit design labs, organised by Jamila Varawala turned into a discussion on 'why we do what we do' : a meditation on the sources of our inspiration and the quest for sincerity in art.

Ohayo gozaimasu Japan !
Last but not the least was a unexpected visit to Japan organised by AOTS, which brought together 19 animation artists and professionals for a 9 day visit to the land of the rising sun and Anime!! With guest lecturers ranging from long time (now retired) director of Doraemon, the legendary Shibayama sensei to the multi award winning Koji Yamamura (for 'mount head') to the head of the Japan Animation Association, an enlightening time was had by all. Topped with a visit to the Sensoji shrine, Kamakura (the birthplace of the samurai), the awesome Fujiko. F. Fujio (Doraemon) museum and the enchanting Akihabara district with its comic and toy shops which saw all of us become crazy kids again!!*

Woof!
The canine team saw new addition in the form of OMie, Teddy n Noddy..* Many canine adventures peppered our lives throughout the year.. but puppy love grew in leaps n bounds! Shambho & Damroo are doing very well too..

*Each of these events deserves a separate post to detail the experiences and learning... every life event has been informing the next and enriching it... Today is the first day I have taken an off to sit down and recap life...I hope that I will be able to note the unique gifts of every step before they merge into subconscious ocean of learnings.

For now A very happy birthday to Animagic! congrats to Animagicians for being splendid and a dream for the year ahead!

Thanks for the patience and till the next time (soon... :))

Posted by the Conscious Self at 4:02 AM No comments: