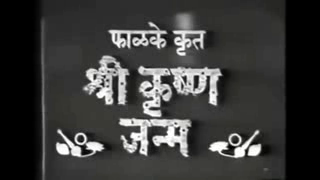 On this happy day I was made even happier by the discovery of this treasure on youtube!!! We live in lucky times! SO presenting Dadasaheb Phalke's presentation on Krishna's birth from 1918!!!!! Exactly a hundred years back!!One of the early pioneering efforts in Indian filmmaking, 'the film' is not complete but only a very small fragment 10% (less than six mins) of its original hour long length...

And it is a silent film - jumpy-jerky-all over the place to our 'well adjusted to cinema spectacle' eyes... but its a wonder to behold nevertheless.. for me at any rate

:)
And as a bonus the video is combined with a fragment of another Phalke film - 1927's Bhakta Prahlad!!

Only sticking to Shri Krishna's theme for now -
Witness the harried people beseeching the Gods for help as Lord Vishnu reclined on Sheshnag with Devi Lakshmi and Brahmaji on the lotus emerge from the sea..Lord Vishnu 'shows' the suffering folk his intent.. he will incarnate as Shri Krishna, but transforming into the little child.. (this is a simple and great example of the visual language.. seems obvious but isn't) 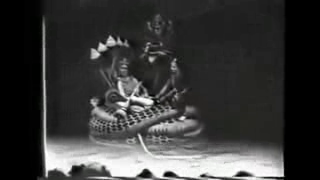 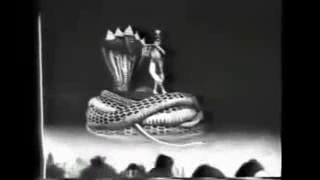 Then the fragments again 'show' Kamsa's hallucination.. yes.. this 'akashvani' or the warning from the ether is also shown in a brilliant sequence where Kamsa is overwhelmed by multiple Shri Ks of different ages who he tries to fight off in vain by slashing at air with his sword! 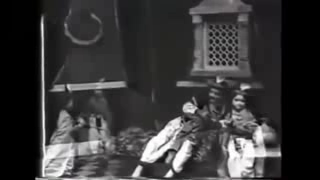 But... before that is on of the great examples of visual effects in films, which stands well against the best being done anywhere in the world at that time ( incl George melies!!) Kamsa hallucinates or sees his head flying off his body in a geyser of blood!! "It is part of film lore that the blood in this trickshot was hand tinted red!" - Light of Asia -Indian silent Film edited by Suresh Chabria- #currentlyreading - #serendipity) 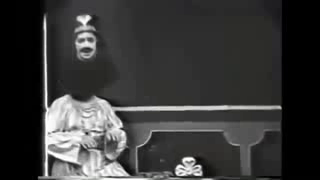 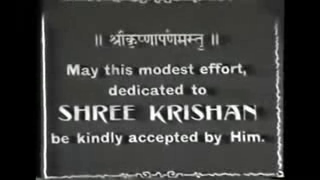 I love this end of film title card... apparently the silent film was accompanied by actual singing of bhajans and aartis at the end of screening for the devout to get the full experience of having witnessed Shri Krishna!

Posted by the Conscious Self at 8:21 AM No comments: 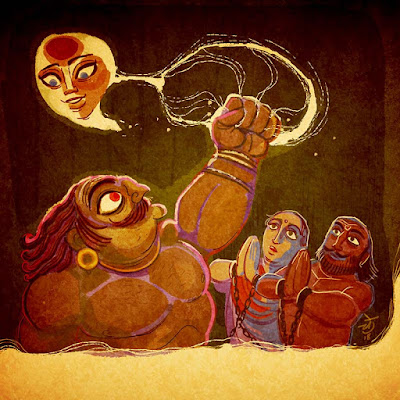 ...The baby cried as soon as the shackles were back on and the gates shut once again behind them.. The sleeping soldiers who had snored thru the entire adventure of Krishna being born and smuggled out of prison were roused from their sleep.. they rushed to their king!

Outside the rain, wind and thunder continued their violent performance anxious and steadily moving to the climax of the events of this long night..
"The poor child!!" she wailed.. "but its a girl, Devaki! the prophecy said the eight would be a boy..."! Even though he had been out in the rain most of this night crossing the Yamuna in spate, twice, to transport the saviour to safety to his friend, Nand's house and bringing back his newborn child as instructed by the Divine voice.
The tyrant wasted no time in getting to the dungeons... this was the moment of truth.. the moment he had been waiting for... the moment for which he had his sister and her husband imprisoned... the birth of the eight son! The son who was foretold to be his doom! His eyes bloodshot with the anxiety of years he looked at the child... a girl?... brushing away Vasudev and Devaki's pleas for mercy, he held the infant by her leg like he had all her seven elder brothers... and raised the wailing child up in the air to dash her to the ground like he had the rest...
but she slipped from his fingers and became light.. before he could blink, she laughed!
She was MahaMaya- the goddess of illusion herself and she teased him "your slayer is alive and well...!!
Kamsa's life was now of a man waiting for his death.. he would fight his fate ofcourse... but his every living moment would be consumed with the vision of the avenging child.. his nightmares were the dreams of deliverance for the people of Mathura...and indeed his own... though he knew it not. 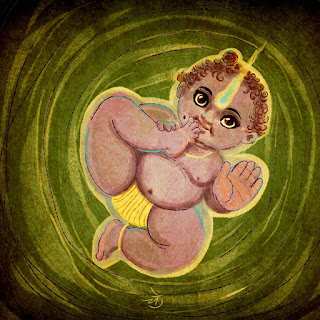 Posted by the Conscious Self at 7:44 AM No comments: