Tripura has won at the first competition it has been entered into!!
The FICCI Frames convention is an annual international event in Mumbai addressing diverse media concerns. The BAF awards were instituted in 2004 to honour excellence in Animation.
Raju & I was a winner at the very first awards as the Best short film! Chakachak was nominated the next year. Maaaa was never entered becoz of some random cfsi diktats!!
Tripura, the fourth offering from Animagic and its first feature (as regulars already know) was awarded yesterday at a glittering event as the Best Feature Film Direct to DVD!!

Mark Eyers, Chief Content Officer, Turner Entertainment Networks, Asia Pacific, was present on the occasion. He was very happy for us and promised petitioning friends from the industry that CN would certainly be airing Tripura soon!!! This time I hope more people will get to watch it!!!


I am so thankful to FICCI and the jury for selecting our picture and validating our efforts at creating what we believed in!! And I cant thanks my special Animagicians enough... once again! Love ya all!!
And group hug to ACK, Turner and Inspidea for letting us dream and supporting us in the best way they knew.
It was tough but it was worth it.
As I told a dear friend recently, even a little validation goes a long way!!
Btw the other nominees in our category were two films also associated with Turner. Turner, Asia had entered a film produced entirely in Malaysia, (Inspidea again! Those guys are just too fast!) called Arjuna and the adventure of the Ice Lotus and Cartoon Network Studios, US had entered Firebreather an all CGI feature directed by one of my heroes Peter Chung (Aeon Flux, Animatrix)!!! However Tripura was entered by Animagic...


Here's looking forward to many more such exciting moments with Tripura!!

Posted by the Conscious Self at 4:25 PM 2 comments:

OM NAMAHA SHIVAYA!!
On the auspicious occasion of Mahashivaratri... want to put down my thoughts about the character design process relating to the great God. Actually the post has been in the works since the last one on Maya's design, but somehow it just hasn't got completed till now! 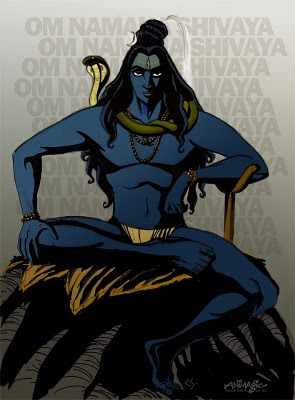 Designing Shiva was most of the most important things personally and we went thru Shiva as he had been depicted by practically everybody! We looked at everything we could find, from the bronze sculptures of South India, the reliefs at Ellora and Elephanta, to the comic book depictions of Waeerkar, Mulick and Kavadi and drew till what felt like Shiva to me, was on paper. Everybody responded to it favourably enough (above).
Getting the design correctly onto screen was the most unfortunate part of Tripura tho. For some reason the studio was not able to match design at all and even corrections sent didn't somehow get implemented. One of the mysteries of production dynamics to which I haven't received any answer yet.

When Shiva went into destruction mode he would become Pashupati the primeval hunter.. the lord of destruction! In his terrifying aspect Shiva is often depicted as Gajantaka in the Ellora panels and elsewhere.
Since we felt there should be definite climb into the climax.. the buildup of the moment of Shiva becoming Pahupati would be fascinating to watch.. Even Vishnu and Brahma  contribute to the formation. (In the puranas, the gods are described as contributing to the process by providing various accessories)


Shiva in his violent aspect was to still be graceful, elegant.. when Shiva does it.. it is dance of destruction!! Maybe in  a future post,I will talk about this sequence in detail as many have expressed their satisfaction with this depiction of Shiva as the Destroyer!! 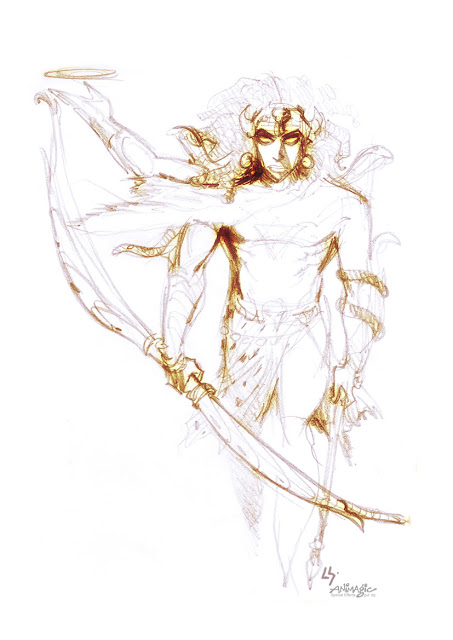